Buying or renting - what is more worthwhile?

Securing a housing is one of the largest budget items for most people. If you are not one of the lucky ones who have acquired their own housing almost for free during the housing fund privatization in the 90s or by inheritance, you basically have two options – housing in a rental or “in your own”, i.e. with the burden of a mortgage. But what is more favourable? Is it better to be indebted for decades or to make use of the flexibility and carelessness a life in a rental has to offer? 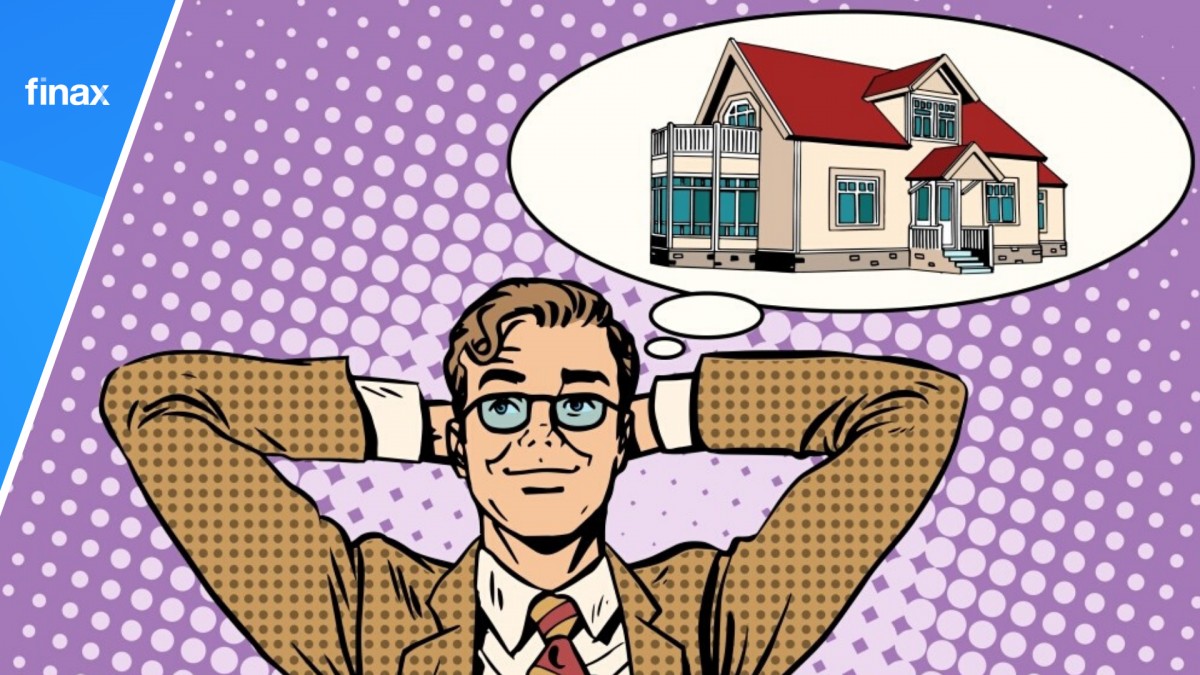 Considering the current property prices, only few people are able to secure a roof over their heads completely on their own. I have personally experienced both alternatives mentioned above.

After I graduated from university, I lived in various rentals for a couple of years, since long-term I was not a big fan of life on debt. Finally, I also subscribed to a bank for 30 years and contributed my 2 cents to the rapid growth of indebtedness of Slovak households.

What forced me to do this in the first place was a new life situation – birth of a son. Living in a relatively cheap 1-bedroom apartment had been quite fine until then, but long-term it was no longer an option. Unfortunately for me, it was only then that I began to consider all the pros and cons of rental and mortgage. Had I forced myself to do it sooner, I would have saved a considerable amount of money.

Renting = throwing money down the drain?

The biggest advantage of living in a rental is flexibility. If you are still not sure where you want to work and live long-term, you’ll probably appreciate a very simple option to make a change.

Has your situation of commuting to work got worse due to the construction of a beltway? Never mind, you can simply move closer to the workplace. You can also change your job without major complications, and there is no need to be confined to one single city and its surroundings, where there might be a lack of interesting opportunities.

Also, you don’t need to worry about property maintenance or have concerns about fluctuations on the real estate market anymore. Great advantage of renting is also availability – just pay your monthly rent and typical one-month security and you can live practically anywhere you want.

Conversely, buying your own house or apartment will be probably the biggest transaction of your life and it requires a sufficient financial preparation. Without having resources of your own (ideally 10-20% of the purchase price), it will be very difficult to get your own place to live nowadays.

Therefore, I certainly disagree with the often repeated assertion that renting a home means throwing money down the drain. Whether you are renting or you have opted for a purchase, in both cases you pay to cover the vital needs, same as when buying a meal or clothing.

When does it pay off to buy?

The problem is, however, that if you can afford the rent, you can probably also afford living in your own. The rent often represents a similar amount (usually even higher, though) as the mortgage installment and other operating costs when buying a comparable property.

The monthly mortgage instalment comprises interest and so-called amortization – fraction of the instalment that actually reduces the total debt. It is exactly thanks to the amortization that you will have repaid your mortgage in 20 or 30 years‘ time, depending on the length of the loan repayment period you have committed to in the bank.

For example, if you take out a 150-thousand mortgage with a 30-year maturity and an interest rate of 1% p.a., your monthly instalment will be 482 euros. However, up to three quarters of this instalment (approx. 360 euros), will be used for repayment of the total amount which is due already in the first couple of years of the repayment period. And over time, this ratio will further change in favour of the principal sum repayment.

However, considering the interest rates nowadays, you will have repaid about 15% of the principal in 5 years. For example, even if the prices have not grown or declined (up to -15%) 5 years since the purchase, you will not end up in a worse situation than in case of housing in a rental.

Not to mention that you have a relative certainty of not being evicted by the owner and you can remodel the living space freely. In addition, any eventual profit from sale is exempt from income tax after 5 years from its acquisition, so that even more frequent moving is not a problem. 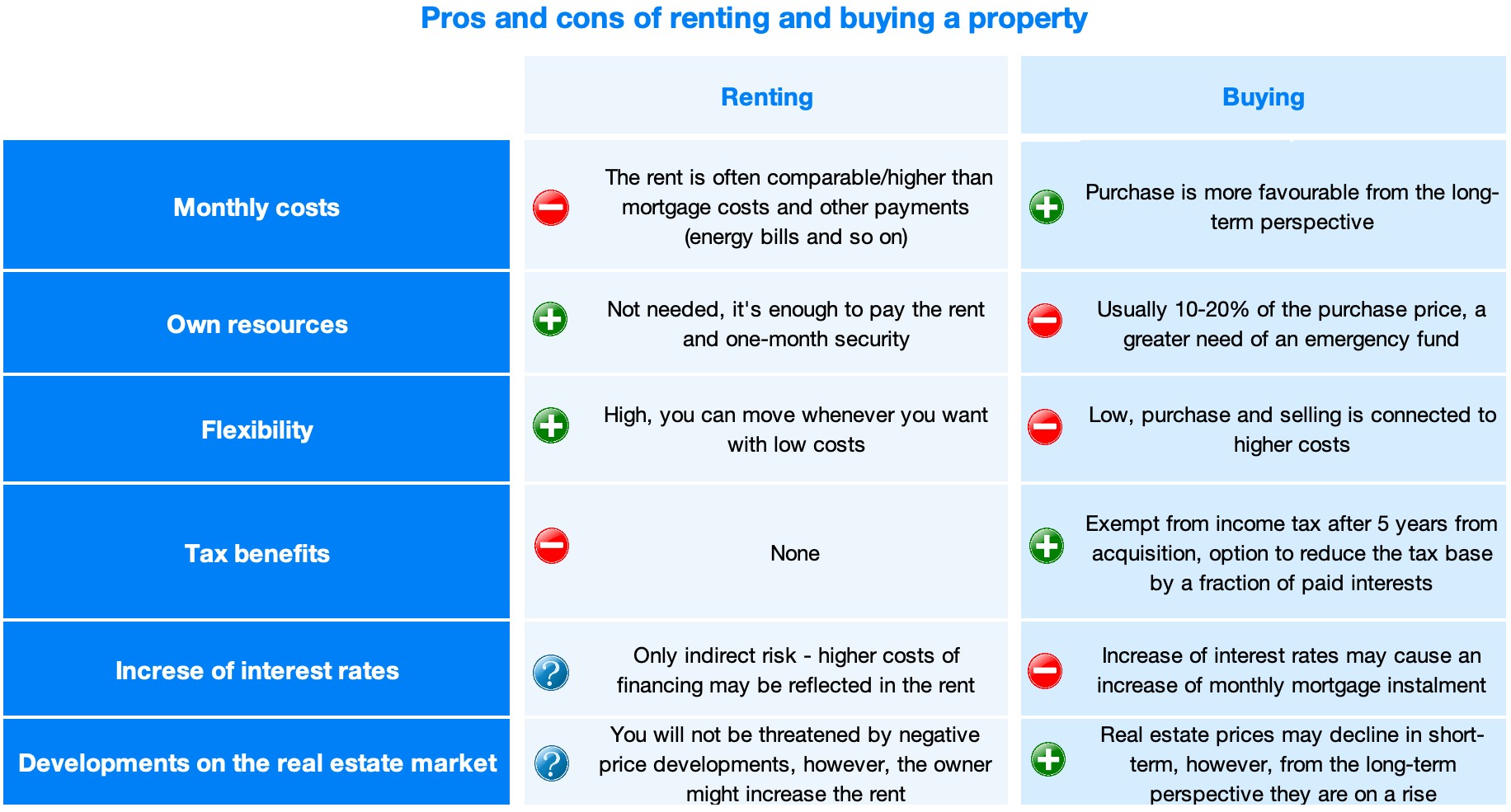 What if you lose your income?

The biggest (legitimate) concern of most people is whether they can afford to repay the mortgage even in case of unexpected issues, e.g. when they lose their job. Many people are facing such situation today.

Even the mortgage-payers, without a sufficient emergency fund, who have experienced a decline in revenue due to global pandemic COVID-19, have been emerging from the current situation in a quite good condition. They can easily and freely request their bank to postpone the mortgage repayment for up to 9 months, thanks to the Government’s agreement with the banking sector representatives. Almost 100 thousand Slovaks have taken advantage of this option so far.

Simply put, if you have a problem, it’s only your problem. If everyone has a problem, people start looking for a system solution. No one wants to see mass bankruptcies, and believe it or not, the banks do not have their sights set on your property.

Similarly, there is a legal possibility of principal repayment deferral or reduction of instalments in half, up to 36 months after the birth of a child. Therefore, even after the other costs have been accounted for, you would be able to live 3 years for costs less than half of the comparable rent. Good luck with finding a similarly willing landlord.

Also, keep in mind that if you are not able to secure housing before retiring, you will probably have a big problem. The average pension in 30 years will be barely enough to rent a one-room flat on the outskirts.

Here, we are talking about the entire pension being spent on housing – you would have nothing left for groceries, clothing, medicines, etc.. No wonder that Slovaks overwhelmingly prefer buying to renting.

But don’t believe everything your read. Housing in Slovakia (also in Bratislava and large district cities) is still affordable. In the next series of blogs, we will have a look at how to prepare for buying a property and what conditions must be met by the mortgage applicants nowadays.