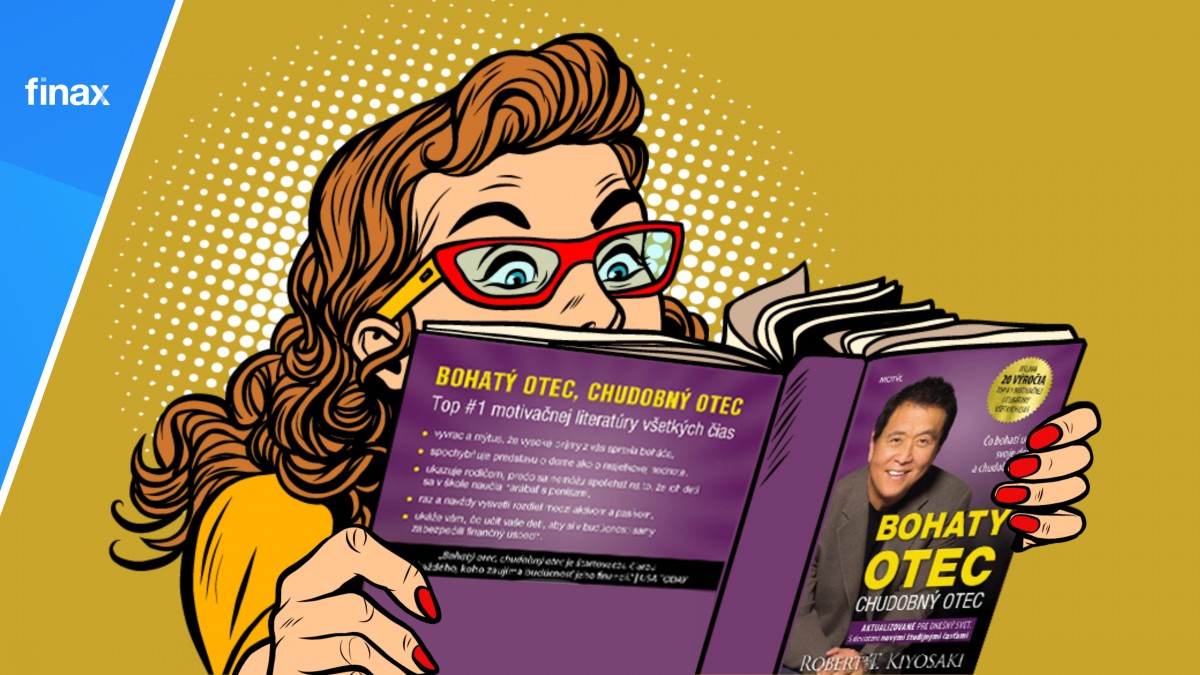 Robert Kiyosaki is probably the best-selling writer of books dedicated to financial literacy. The book Rich dad, poor dad is his most popular one, with more than 40 million copies sold worldwide.

I am glad that his books have also been published in Slovak. Slovak books dedicated to financial literacy and personal finance management are as rare as hen’s teeth. That’s why you should definitely read this book.

The book tries to capture how Robert learned to manage his money and became rich using stories and simple examples, spanning from his childhood all the way into his adult years. There is an infinite number of options how to become rich, however, the traditional education focused on grades and knowledge doesn’t teach us how to take advantage of them.

The story begins with Robert’s childhood. His dad is a recognized university professor. His main goal has always been that Robert achieve good results in school and have the opportunity to find a well-paid job.

On the other hand, his best friend and classmate Mike’s dad was a local entrepeneur, surrounded by skilled people who worked for him and made him money.

In the book, Robert explains why he considers his real father to be the "poor dad", even though he is fairly well-off. He spends all his money on stuff that doesn’t generate any further wealth, i.e. liabilities.

His dad was the typical example of a consumerist lifestyle – the higher his income, the higher his costs for a higher standard of living, what Robert called a "rat race".

Conversely, he considered his friend’s dad to be a rich dad, even though he had never achieved the standard of living of his own dad. The thing was, that he would use his money to buy assets which generated further wealth.

I had always considered my car to be an asset. However, only after having read this book I understood that it’s really a liability. The car I bought only really costs me more money in the form of insurance, gas, and other infinite expenses. I have also dedicated a separate blog to this topic.

Kiyosaki taught me to recognize the real assets capable of generating further wealth. Those are for example real estate properties for rent, a car used as a taxi, a business which generates passive income or equities.

Middle class income is usually used to cover monthly mortgage payments, food, car, holiday, and other regular expenses. Any savings are kept in a bank account or, in better case, invested in conservative funds with high fees. The middle class is also the biggest contributor to the national budget.

On the other hand, the rich keep getting richer because they have learned to see an opportunity where the others don’t. They make their money work for them, so it generates further income and creates a snowball effect – down the road they are making more and more.

This quote summarizes everything and is also very near to my heart:

My rich dad used to say „The key to wealth lies in the ability to convert your salary, as quickly as possible, into passive income or portfolio income because your salary is subject to the highest taxes of all. The passive income is subject to the lowest taxes. That’s another reason why your money should be working for you. The tax on income that you are working so hard for is a lot higher than a tax on income from the money that are working for you.“

This especially applies to Slovakia. In average, 43.5% from the super-gross salary goes to the state in the form of taxes, health and social contributions. The passive income invested in ETF index funds is not subject to tax if you hold them for more than a year. I don’t understand why the Slovak people hold more than 40 billion Euros in banks.

If you want to learn more about how to build wealth, distinguish between liabilities and assets, definitely read this book – it’s worth it. The book is available in all book shops and libraries.